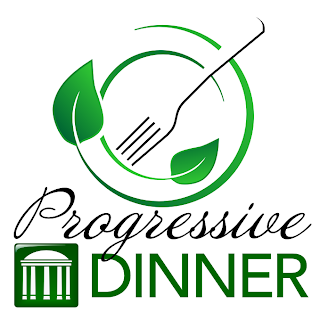 Union Square's Annual Progressive Dinner
A History by Betsy Blades in consultation with Diane Asher
The progressive dinner was started by Greg Senkus. We could not determine a date for the first event, but we can definitely say that it was happening by 1998 at the latest. It has always been a private event in the sense that it was unaffiliated with any community organizations.

Greg is a skilled carpenter whose renovation and restoration work has enhanced many homes in the area. Though Greg grew up in the Union Square area and later owned a home on Stricker Street, he worked closely with Sowebo and groups centered around the market. We think the dinner may have been started simply as a fun social event to draw residents of the two neighborhoods together in a way that formal meetings did not. Residents of both neighborhoods have continued to participate over the years, and former residents have returned to attend the event as well.

When Greg stopped organizing the dinner (likely when he moved), Diane Asher picked it up for one year. Diane was joined the following year by Phyllis VanMeerhaege who was able to computerize the planning template, and they worked together for a number of years. My memory of the years of their collaboration is of the Saturday of the dinner. Phyllis was often at home preparing an entree (and she tended toward the elaborate) while Diane was picking up desserts and wine in her Checker and delivering them to the various venues. Phyllis took over in 1998 with one or more volunteers including Debbie Adler. Debbie and Diane are doing the organizing this year so there is a lot of experience between them.

A complete dinner has three stops for 1) appetizers, 2) dinner in small groups (usually about 8), and 3) dessert for everyone. Each participant (or pair) makes a contribution by 1) opening their house as a dinner venue, 2) providing an appetizer, 3) providing the main course or 4) providing a salad and bread. Please see the sign up instructions for specifics.

Each participant also pays a small fee ($9 this year) to cover the cost of wine and other beverages and the cost of desserts and incidentals.

Getting enough houses for the dinner has often been a challenge. Although this should be the easy part (just set the table and open the door), many people seem to feel intimidated. However, there is no one way to do this. While some hosts have set the table with fine china in a lavishly furnished dining room, there have been many variations. I have sat at folding tables with sometimes borrowed chairs. In one small house near the Market, eight of us ate in the living room with a card table for four and pull-up tables for two for the rest of us. Despite the scattered arrangement, we were able to interact as a group through the fun-filled meal.

The second challenge has sometimes been the main course. Again there have been many variations. One year, the hosts collected on a wedding gift from a co-worker who came to their home and prepared the dinner for us. A bit over the top, but it was a creative approach. Sometimes dinner has been purchased already cooked such as the two different trays of tasty pasta from a restaurant that I ate last year. For things that don't hold up to a wait or reheating such as fresh pasta or fish, it may be possible to make prior arrangements to cook part of the entree on site. Prior arrangements is the key phrase as one neighbor took a raw fish one year that only needed about 15 minutes in the oven. She had to rush home to cook it when she found on arrival that the host did not have an oven. As long as you provide a well prepared entree, it does not matter how elaborate it is or what ingredients you choose to put into it.

This has always been an enjoyable event with the opportunity to spend the evening with others that you may not know very well. If you did not get an announcement in your door or you did not pick one up at the meeting, it does not mean that you are not welcome to participate.